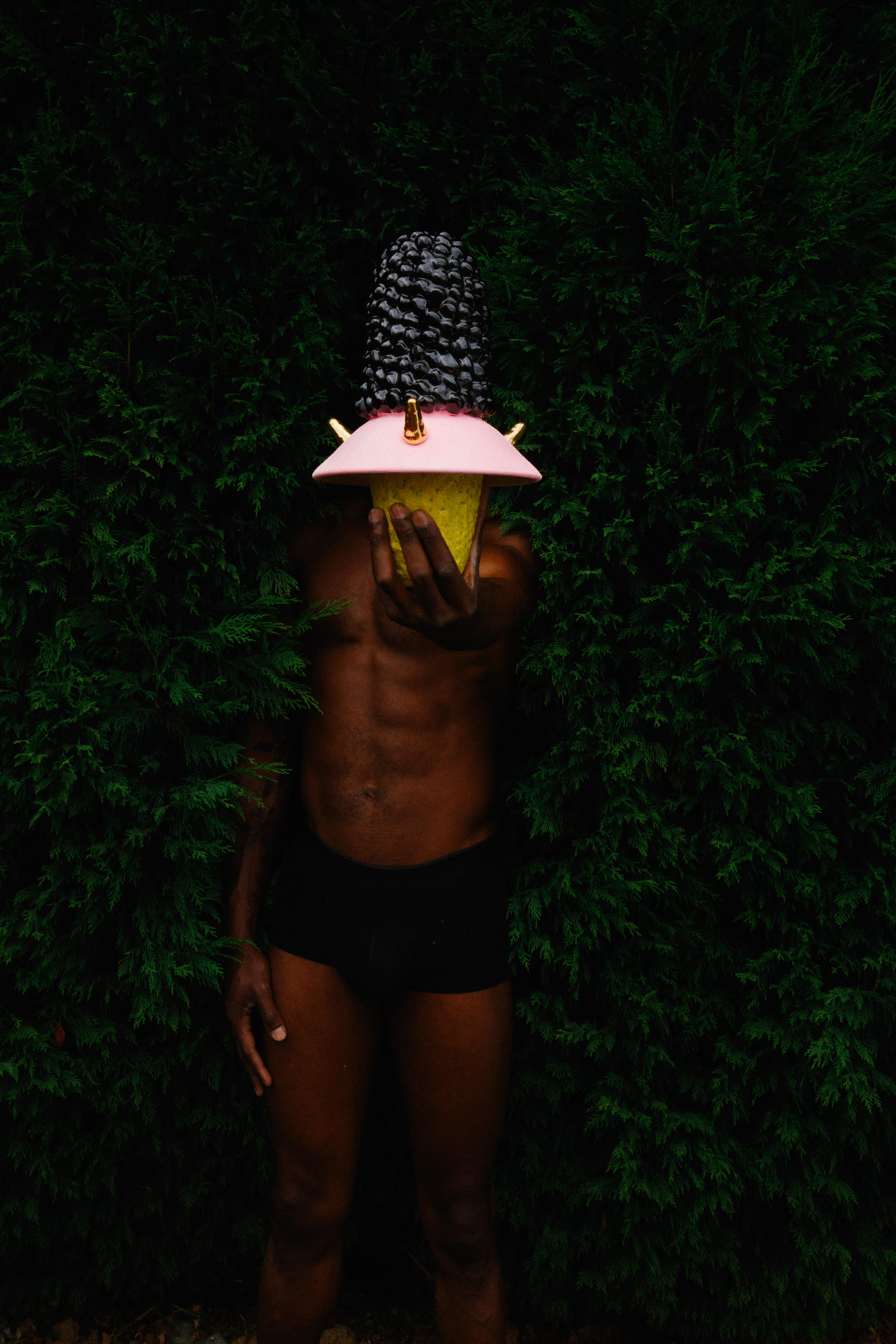 Born in Montreuil (France) in 1987, King Houndekpinkou is a Franco-Beninese ceramic artist who lives in Paris. As the face of a rising generation of artists from the African diaspora exploring global possibilities, King is a member of the International Academy of Ceramics (IAC) and works in France, Japan and Benin.

King grew up in the suburbs of Paris where his childhood was highly influenced by the Japanese pop culture imported to France in the 1990’s (e.g. anime, video games, manga). Thus, during his younger years, he cultivated a passion for Japan. This passion for the Land of the Rising Sun followed him throughout his adolescence and is still vivid today, as he continues to visit Japan every year.

In 2012, while actively pursuing a career in corporate communications and without any prior interaction with the world of ceramics, King fulfilled his childhood dream of visiting Japan. It was during this first trip that he inadvertently discovered the existence of the six historical cities of ancestral Japanese pottery known as the Roku Koyō (Bizen, Echizen, Seto, Shigaraki, Tamba and Tokoname).

One of these cities captured his attention: Bizen, where he subsequently went every year to complete his training in pottery, which started that same year in Paris. These trips allowed him to acquire field experience with the potters of the Keramos group and more particularly with the ceramist Toshiaki Shibuta, who became not a mentor but: a “father of clay”, in his own words.

In Bizen, King was struck by the ceremonial approach adopted by his potter friends to make their creations, whose foundations are based on the work of earth and fire. This creative process gives rise to works of raw aesthetics, covered with a natural glaze of wood ash. Their practice seemed to be infused with Shintoism spirituality and echoed with the Voodoo animist traditions of King’s Beninese heritage. According to him, both beliefs seek a transcendental relationship between man and nature to guide our existence. This revelation convinced him to leave his first life path so to fully devote himself to ceramics, which would become first a personal, and then an artistic quest.

From this experience, King created Terres Jumelles in 2016 (“Twin Soils” in English), a cultural program aiming to unite Benin and Japan through the practice of traditional and contemporary ceramics. Clay embodies a universal material for cultural dialogue, inviting Beninese and Japanese ceramists to share their experiences in order to highlight the unifying and human values of ceramics.

Today, King has developed a practice that blends tradition, spirituality and visceral work of the material. By questioning the porous boundaries separating craft from art today, he creates work at the crossroads between his personal history and the universal narrative of clay work.

While he expresses a deep respect for the tradition of ceramics (whether artistic or artisanal), King still creates works that are resolutely contemporary and modern in their execution (i.e. glazing technique, high temperature electric firing, shapes).

In 2017, he was part of the major tribute exhibition to American potter George Ohr [1857-1918] titled Regarding George Ohr: Contemporary Ceramics in the Spirit of the Mad Potter at Boca Raton Museum of Art (Florida, U.S), curated by ceramics expert Garth Clark. The show featured other major figures of contemporary ceramics such as Glenn Barkley, Takuro Kuwata, Anne-Marie Laureys, Gareth Mason, Ron Nagel, Gustavo Perez, Ken Price, Peter Voulkos and Betty Woodman. According to Clark “all are decidedly irreverent in their processes, disdainful of rules, and liberated in their use of vessel form, morphing into sculpture, painting with similar abandon and an electric palette. Just like Ohr, many are highly controversial talents and their disregard of the conventions of beauty have polarized the ceramics and art community.” King’s other exhibition peers also include artists such as Jeff Koons, Sterling Ruby, Pedro Reyes and interior designer Jean-Michel Frank.

King’s achievements and career path set him in a lineage of artists that have been exploring creative possibilities with the vessel shape which, to King, “functions” as a universal and timeless canvas to engage in conversations accessible to all beings regardless their gender, social status, generation, skin color and culture.

The “anatomy” of some works consists of containers shaped separately on the potter’s wheel (e.g. vases, cups, bowls, dishes), then assembled together to form a sculptural piece with vivid textures. Although built on a base of simple forms, some of his creations seem “tortured” and “disfigured” by an overload of dense materials, a heap of superimposed matte, shiny, and metallic drips.

They visually represent the accumulation of stories and events that preceded them and from which they derive. If we look at some of the details, we notice a thick enveloping “skin”, thorns similar to those found on ritual pots in West Africa. They are reminiscent of certain attributes of plants and animals whose spikes or thorns give them almost divine protection, thus giving them a sacred status.