In January 2016, I was invited to spend a month as artist-in-residence at the Centre – Arts et Cultures in Cotonou, Benin, where I was commissioned to create a series of unique works. At the end of this residency, the works went on display in the Terre de Mémoire exhibition, which was held at the art centre from February 19 throughout March 30, 2016.

My project emerged from a solemn initiative and involved creating hybrid works, combining African and Asian influences. The pieces were, therefore, made with local clay from the village of Sè, which is located in the Mono department in southwest Benin. They were then fired in a Raku kiln, which I built on site especially for the project. The kiln enabled me to fire the pieces using a traditional Korean firing technique that was imported into Japan in the 16th century, where it is used mainly for making bowls for the tea ceremony (or Chanoyu, in Japanese).

Just a few days into my adventure, I found myself in the company of Ms Adanglo, the head potter in the village of Sè. It is this skilfull and experienced lady who supplied me with clay. Unlike the Spanish and French stoneware clays I regularly use, and which can withstand a temperature of 1300°C, the clay from Sè is fired at a maximum temperature of 1100 °C.

I paid several visits to Ms Adanglo and the other female potters of the village and had the chance to watch them making vases and pots that they then fired a hundred at a time in open air. My conversations with the head potter were both moving and highly informative. At the end of my stay, she confessed to me that it came as something of a surprise to have a ‘male potter’ come to her for clay. In sub-Saharan Africa, pottery is an almost exclusively female profession. Men are few and far between…

Once I got the clay, I set about making the pieces on a potter’s kick-wheel, which the staff of the art centre and myself went to pick up in Abomey, the historic capital of the Kingdom of Dahomey (or Danxomè in Fon language) between the 17th and 19th centuries.

The butane gas-fired Raku kiln was made from an empty oil drum. A local welder made some openings on the barrel (e.g. a chimney, burner inlet, holes on the sides) to enable me to attach a 5-cm-thick ceramic fibre blanket, which I fixed to the sides of the drum with terra-cotta buttons. This was essential to keep the drum insulated and help it to heat up quickly. I fired the kiln 10 times at temperatures between 950°C and 1050°C, with each firing lasting around 4 hours.

Although some of the pieces were glazed, others were deliberately left bare, with no coating. Once they were set up on either side of the exhibition hall, the works displayed a striking contrast in styles, generating a dialogue between two families: on the one hand, pieces coated with a glaze crystallised using a process that originated in Asia, and on the other, nude pieces that proudly displayed the distinctive red-orange tone of the African soil. Then, standing in the middle of all this, visitors are invited to imagine a bridge connecting two worlds, which at first glance seem so different…

On the opening evening of the Terre de Mémoire exhibition, I invited Ms Adanglo to give a pottery demonstration, showcasing the timeless know-how of the Sè female potters to our guests. After her very warmly received performance, I then did a demonstration of the Raku firing process by firing a vase (see final two photos). This vase was not included in the final selection of works to go on display in the exhibition.

I will, in fact, take it to Bizen, Japan, next summer to fire it again, this time in a traditional wood-fired kiln. This should leave it with a new coating of wood ash. This 3rd firing project, entitled the BB Project (“BB” standing for Benin-Bizen), will provide a further opportunity to develop this initiative to bridge the gap between African and Asian cultures through ceramics.

The vase will be exhibited in forthcoming exhibitions as a means of sharing this creative experience with the public and provoking discussion on the similarities and/or differences between art and craft techniques in different parts of the world.

Transporting the Raku kiln on a motorcycle taxi

Pottery demonstration in the village of Sè

Firing pots in the village of Sè 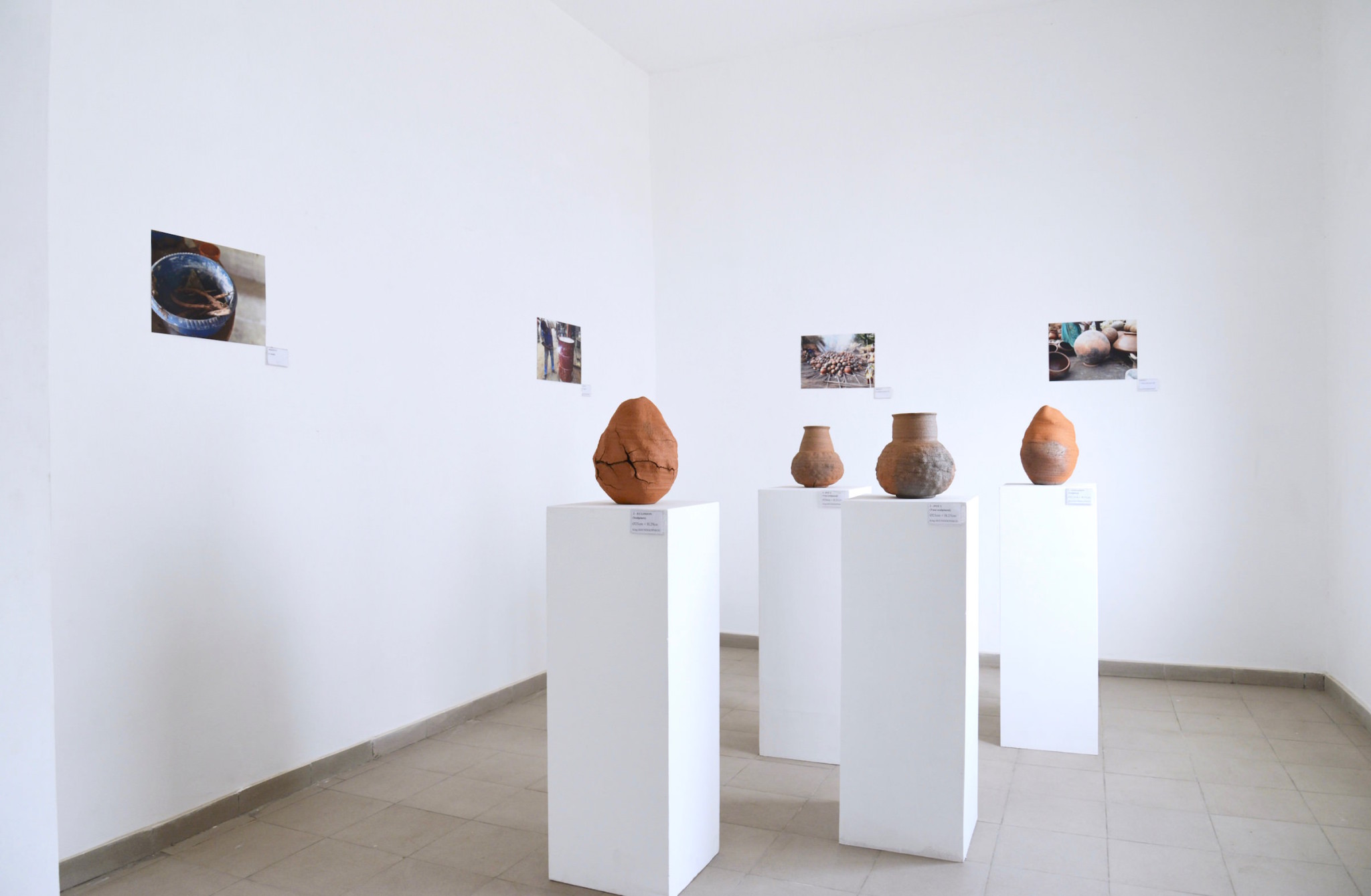 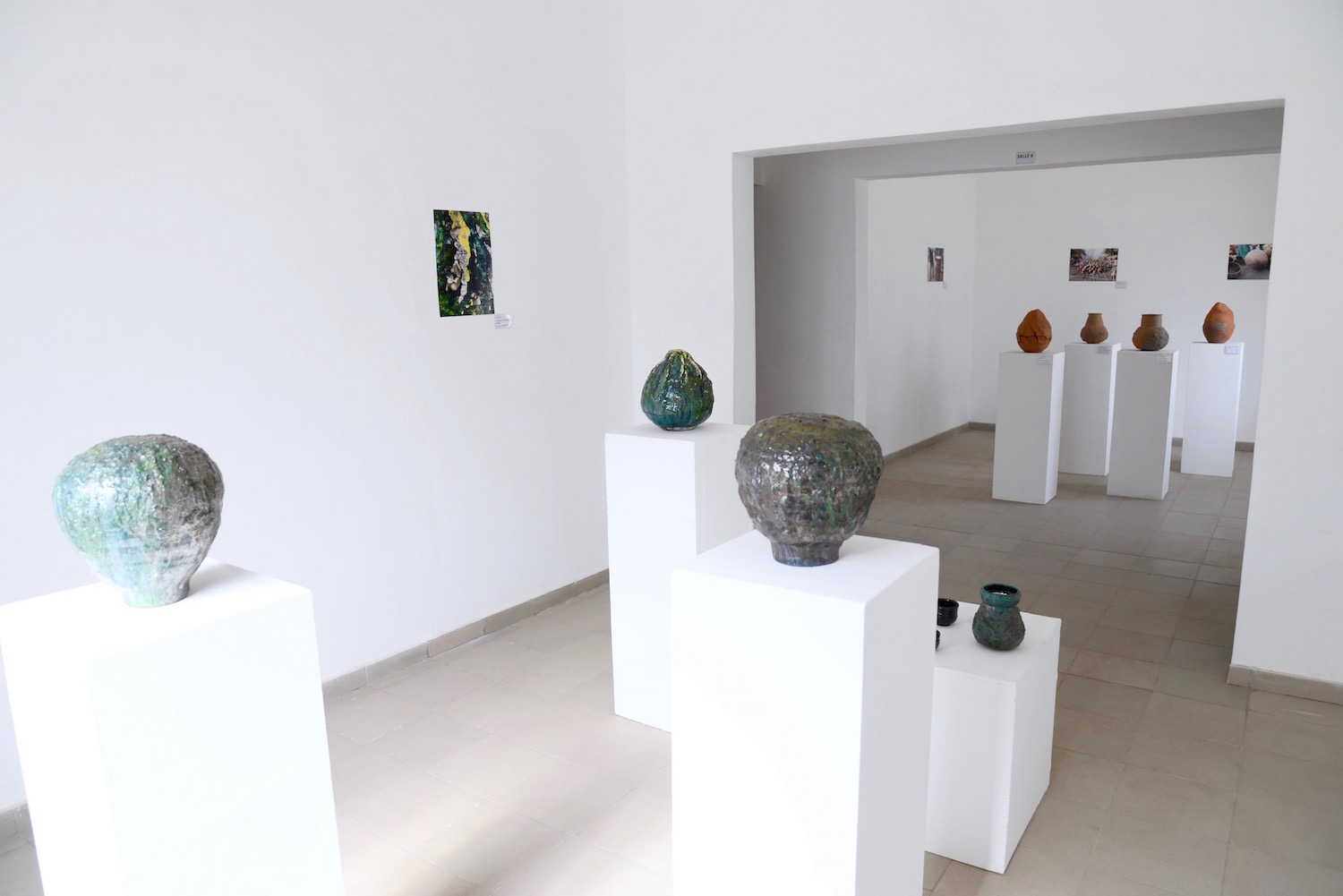 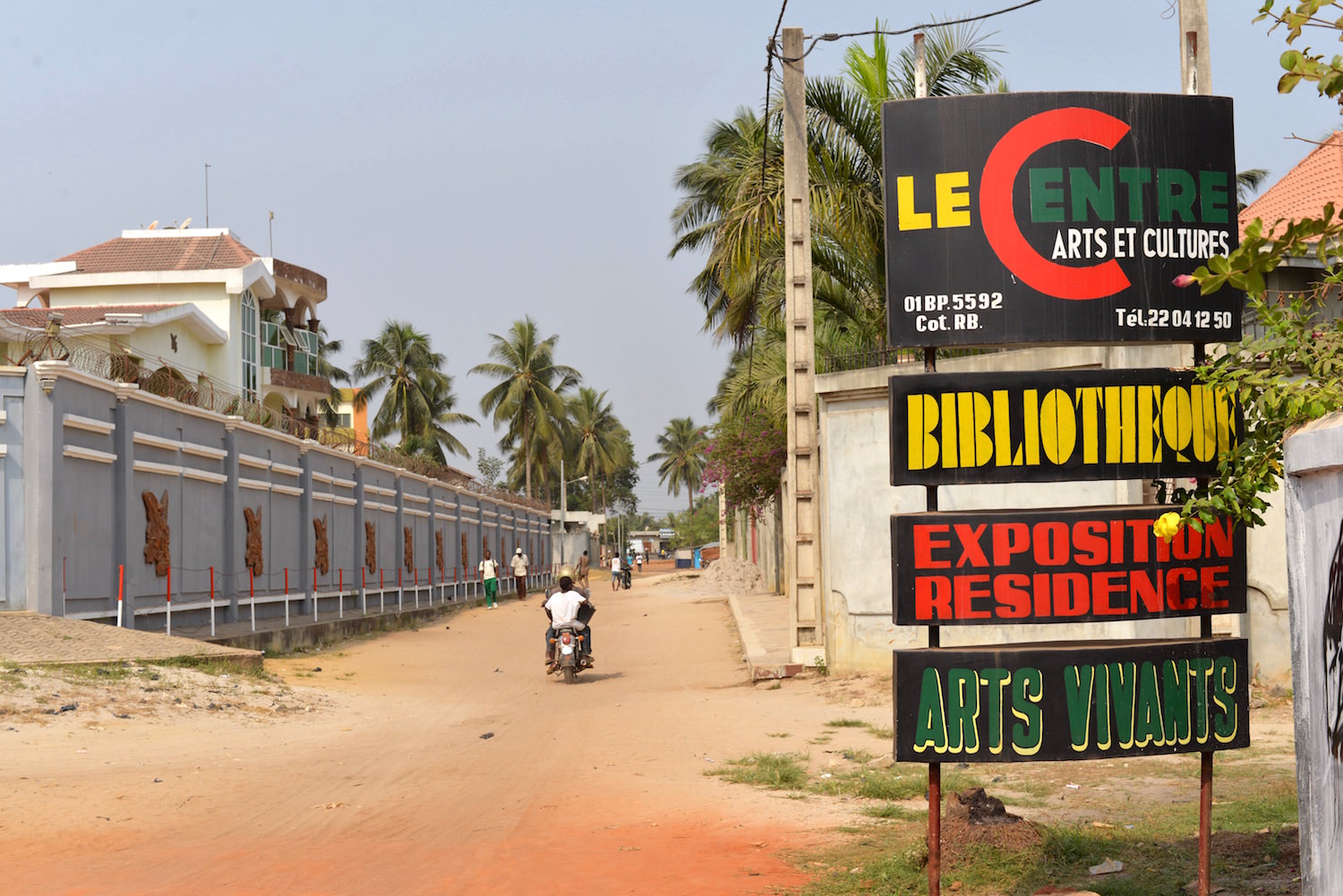 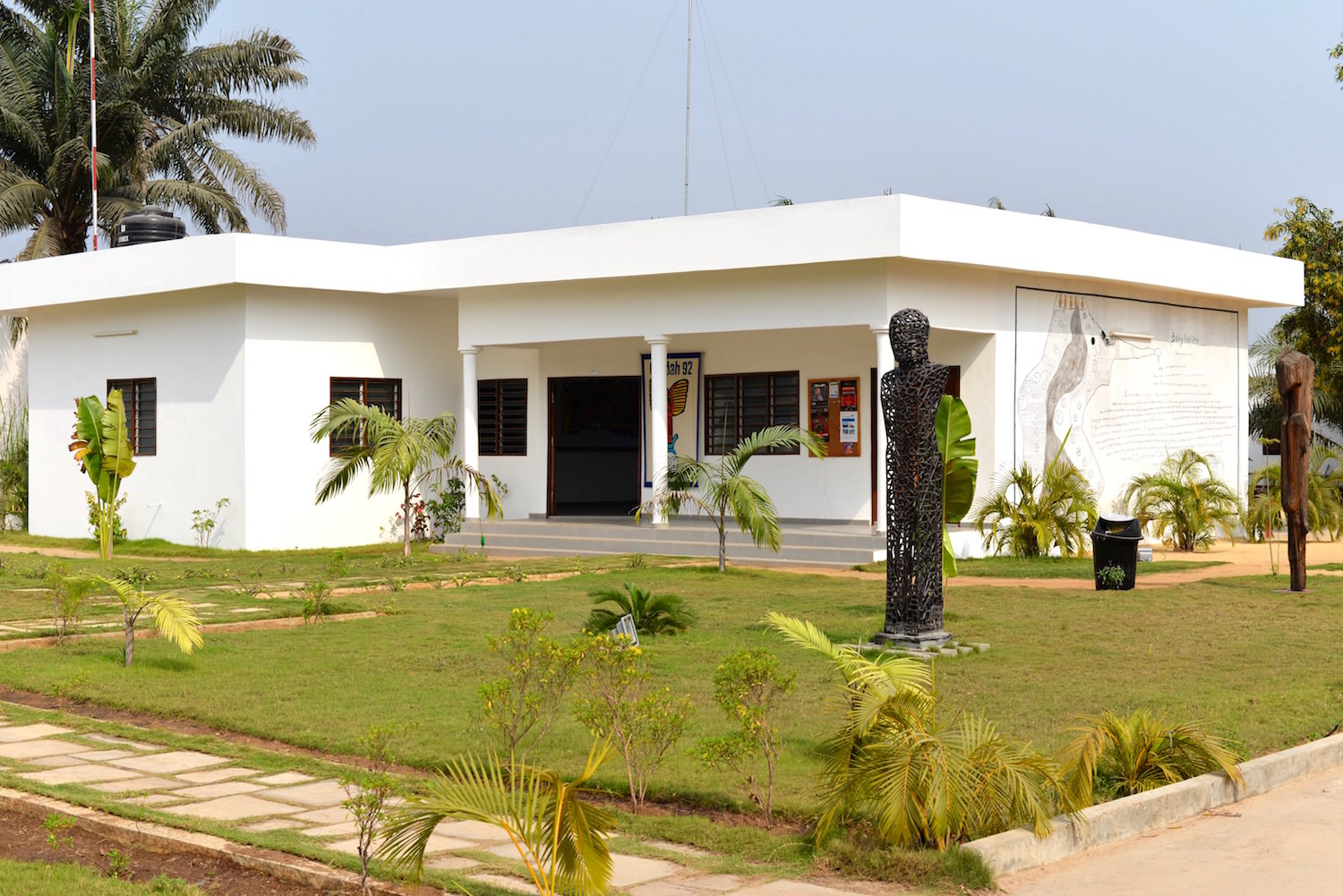 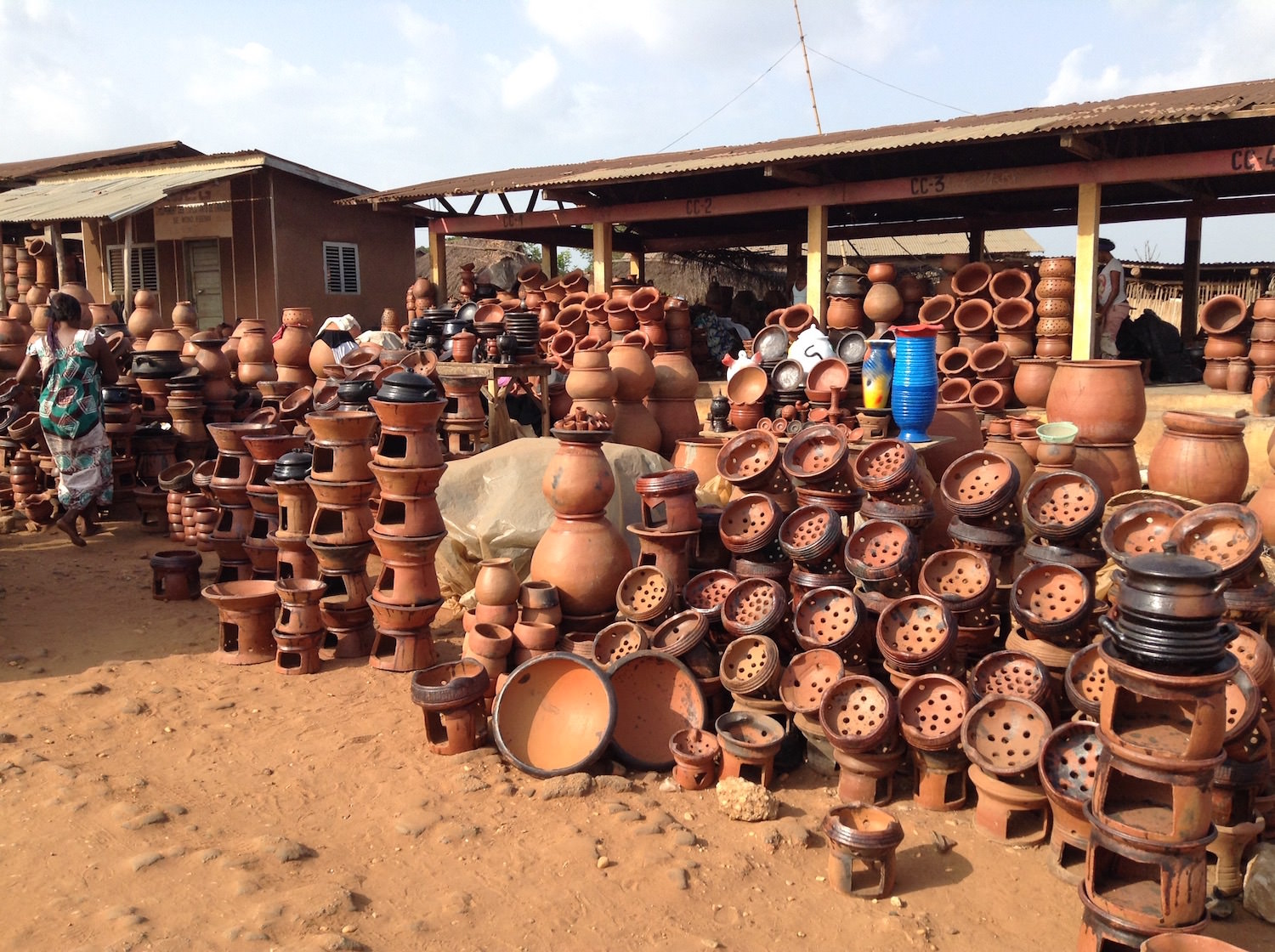 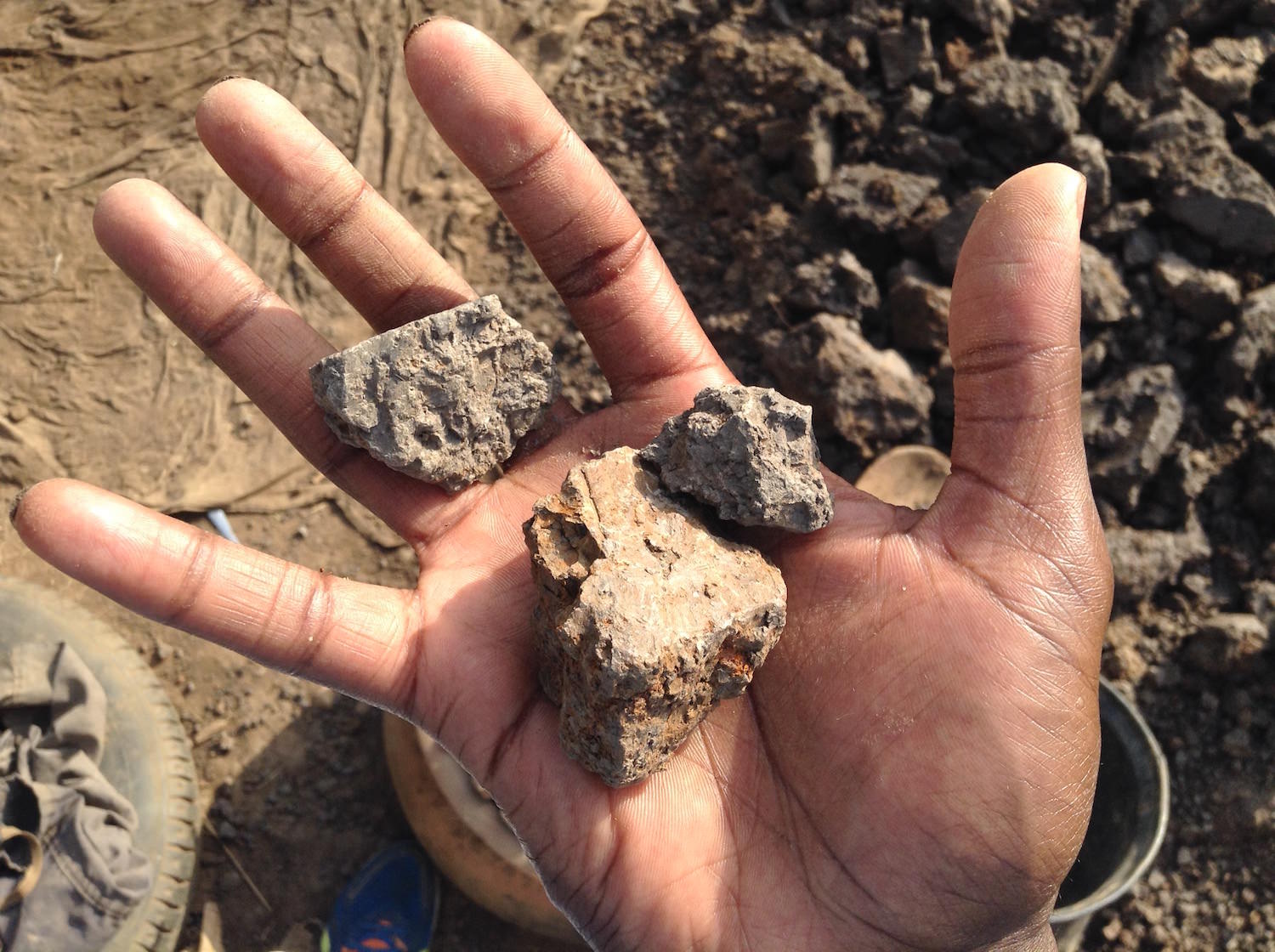 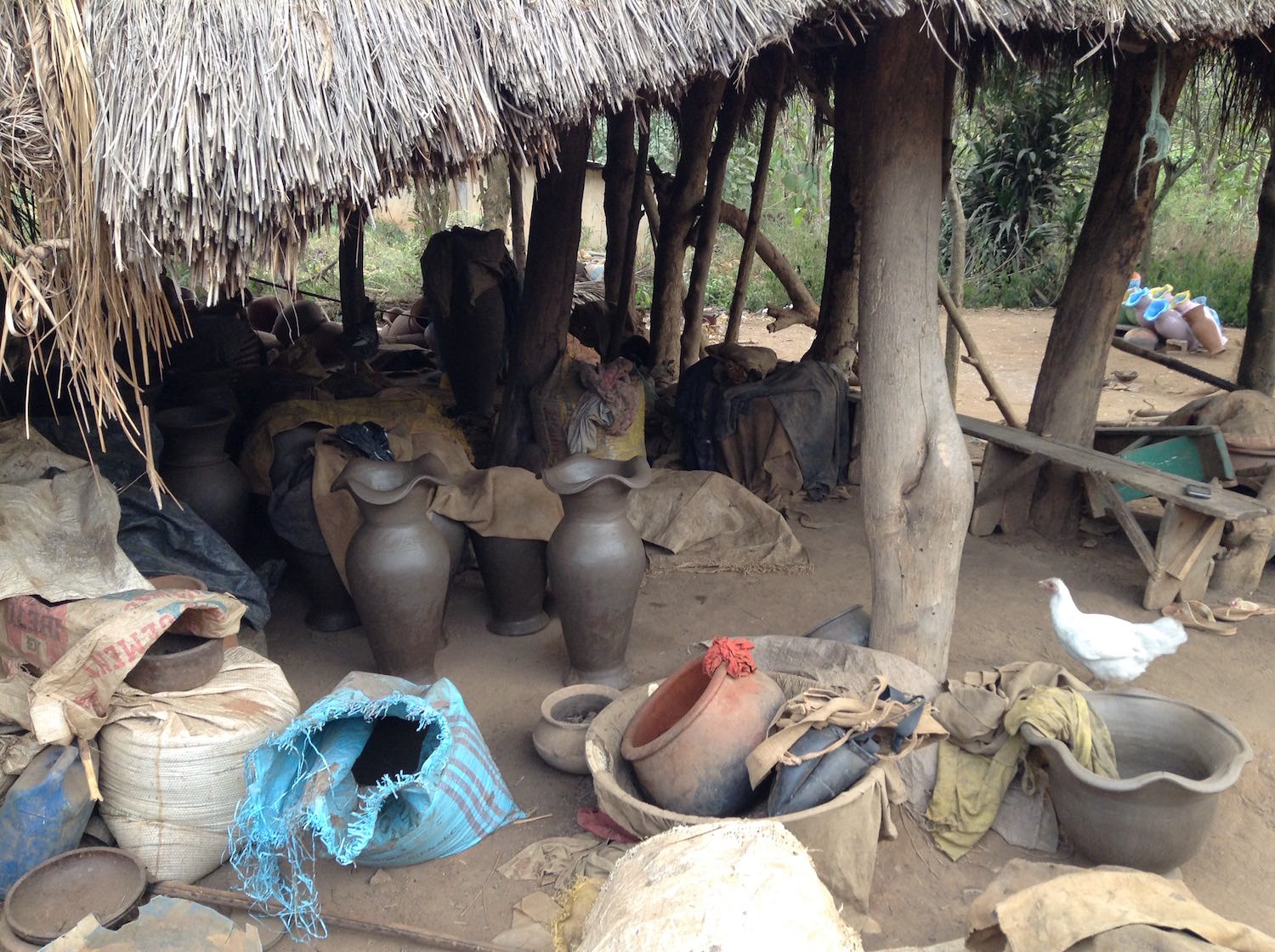 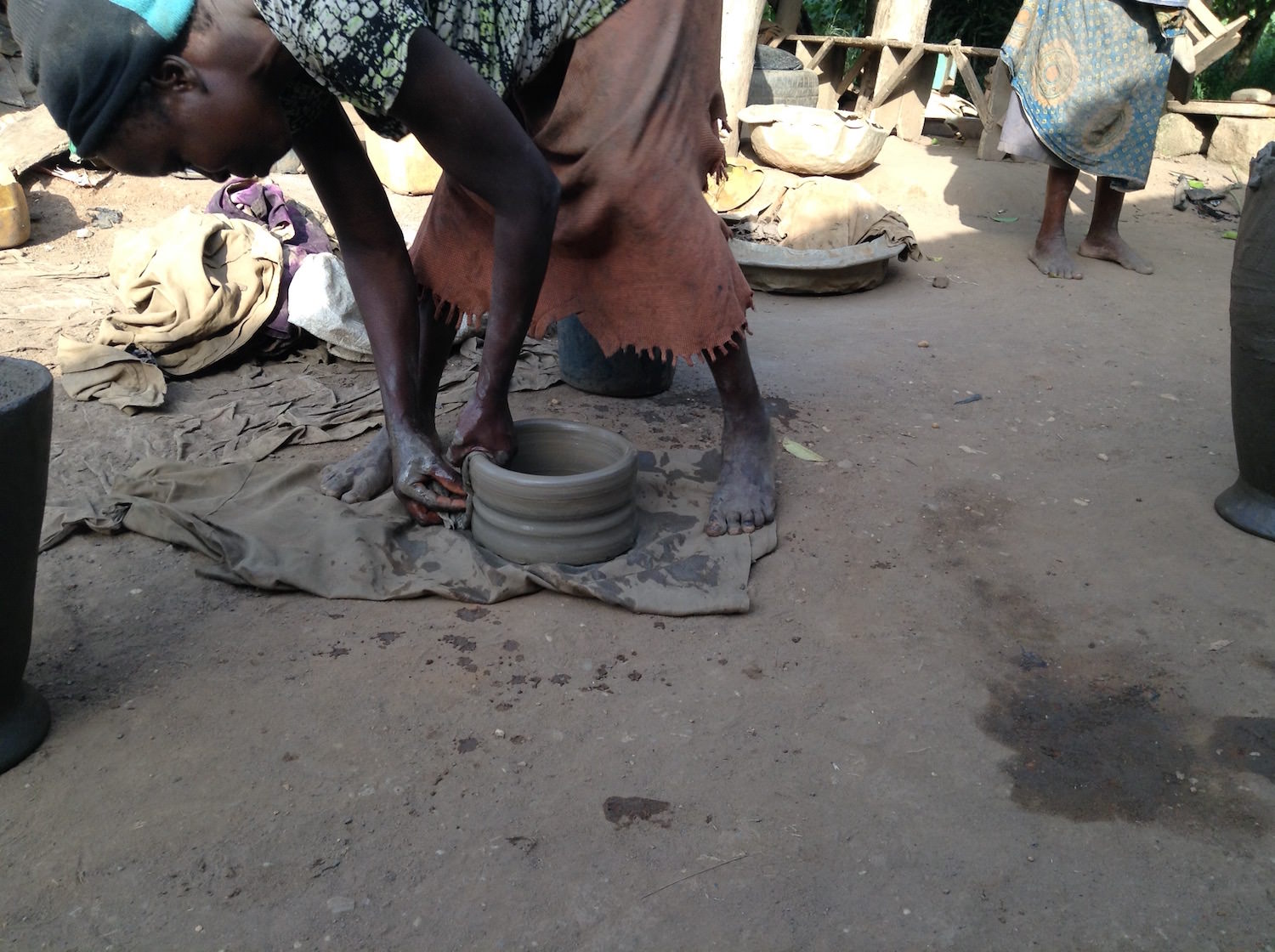 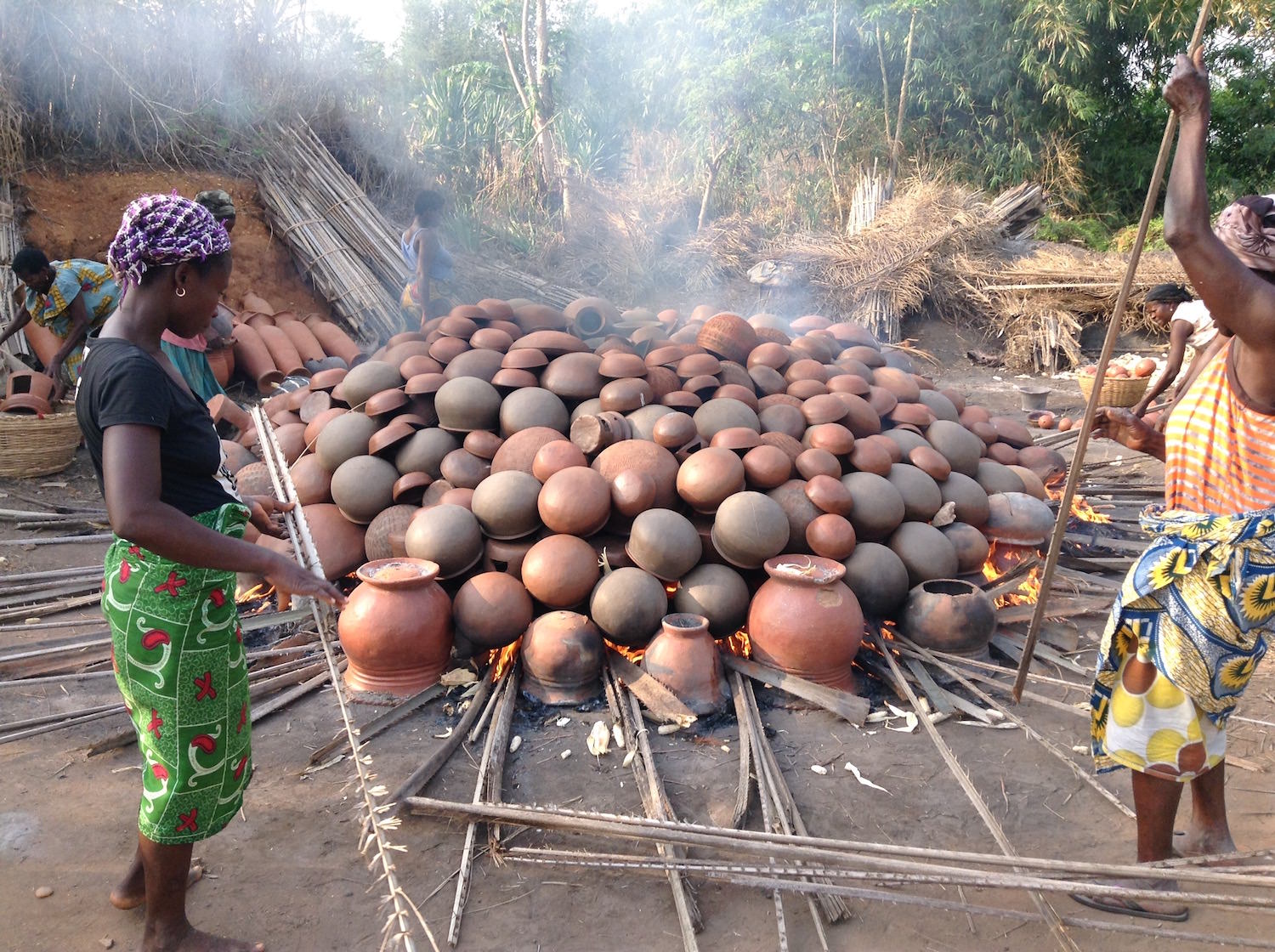 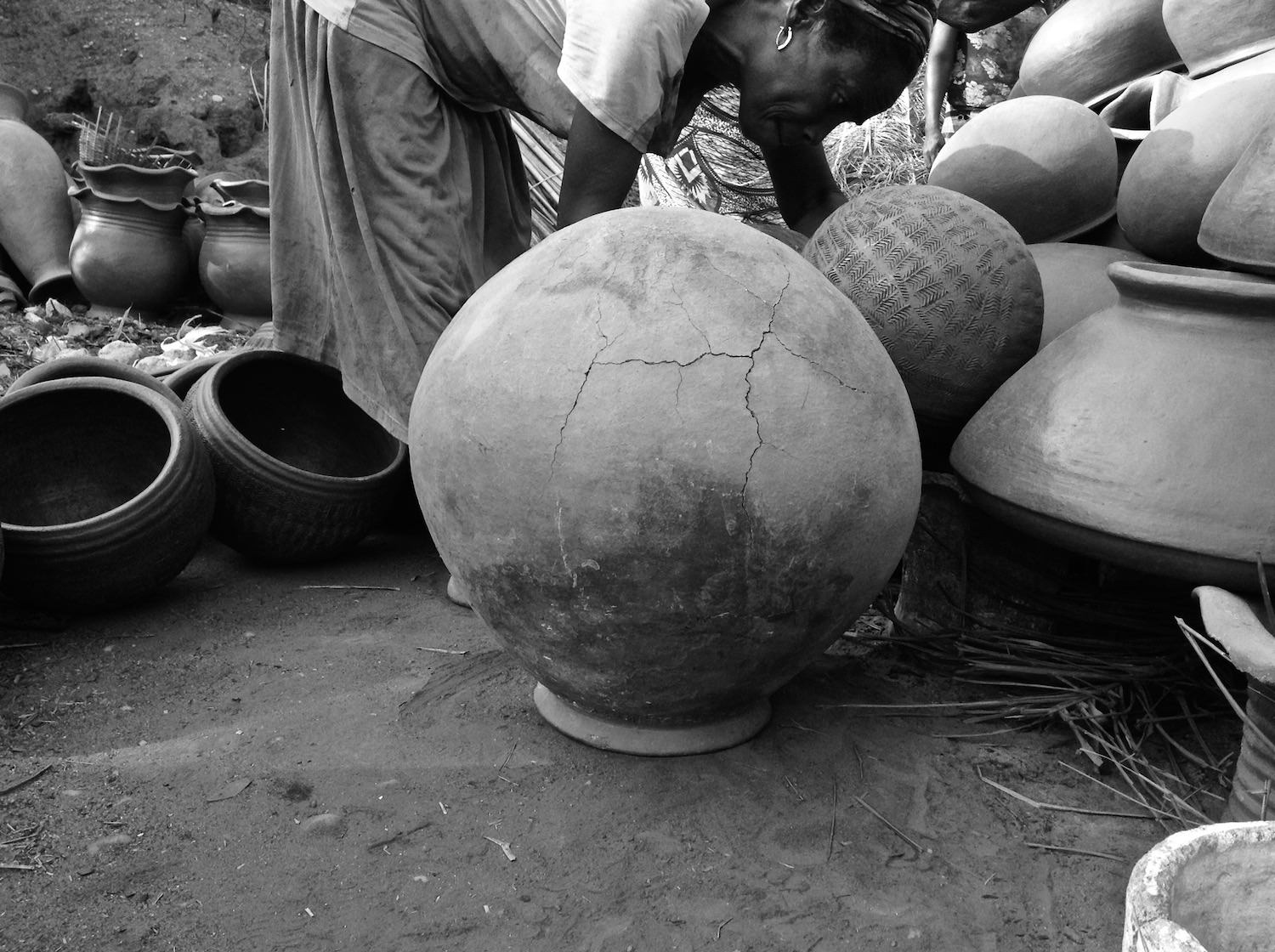 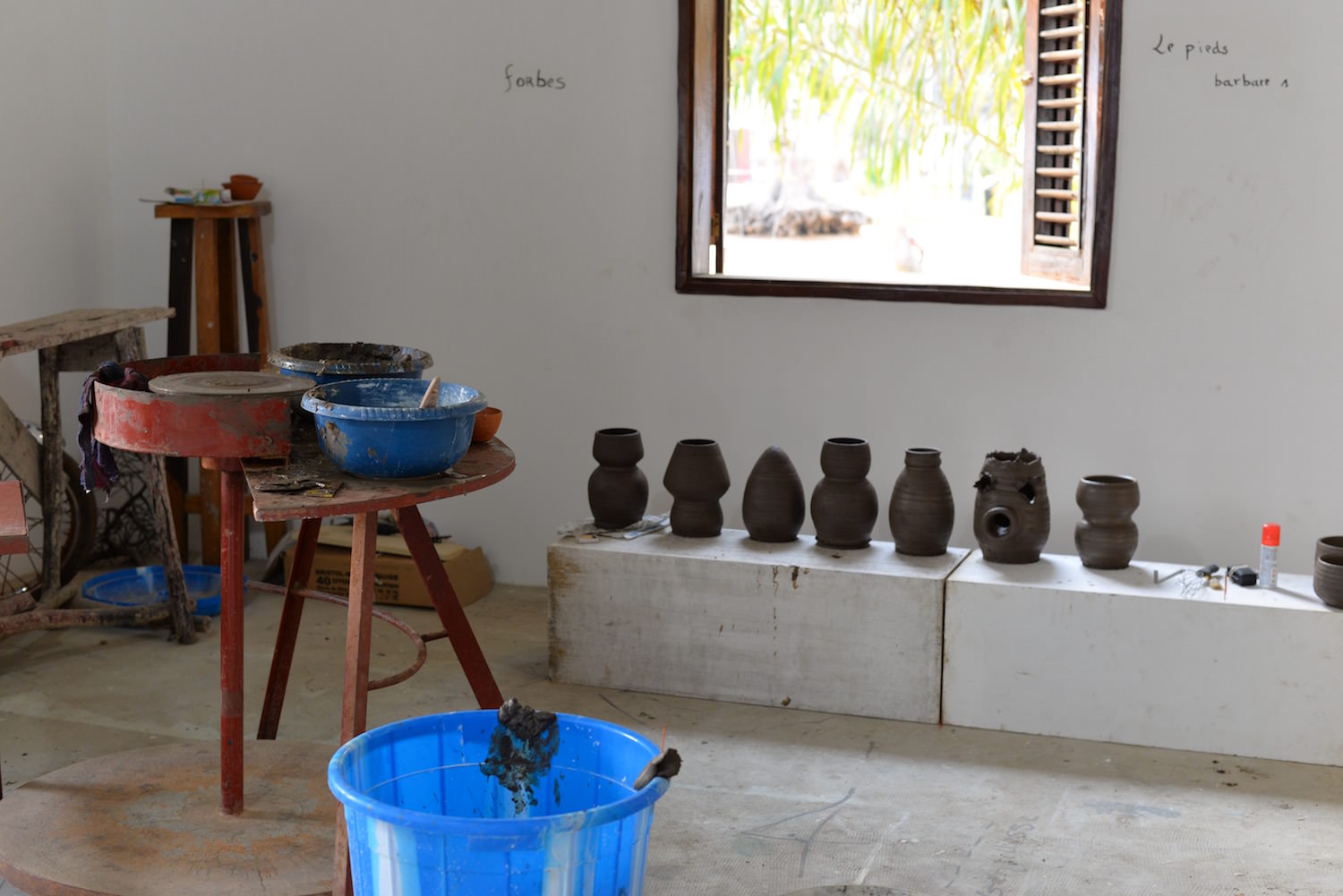 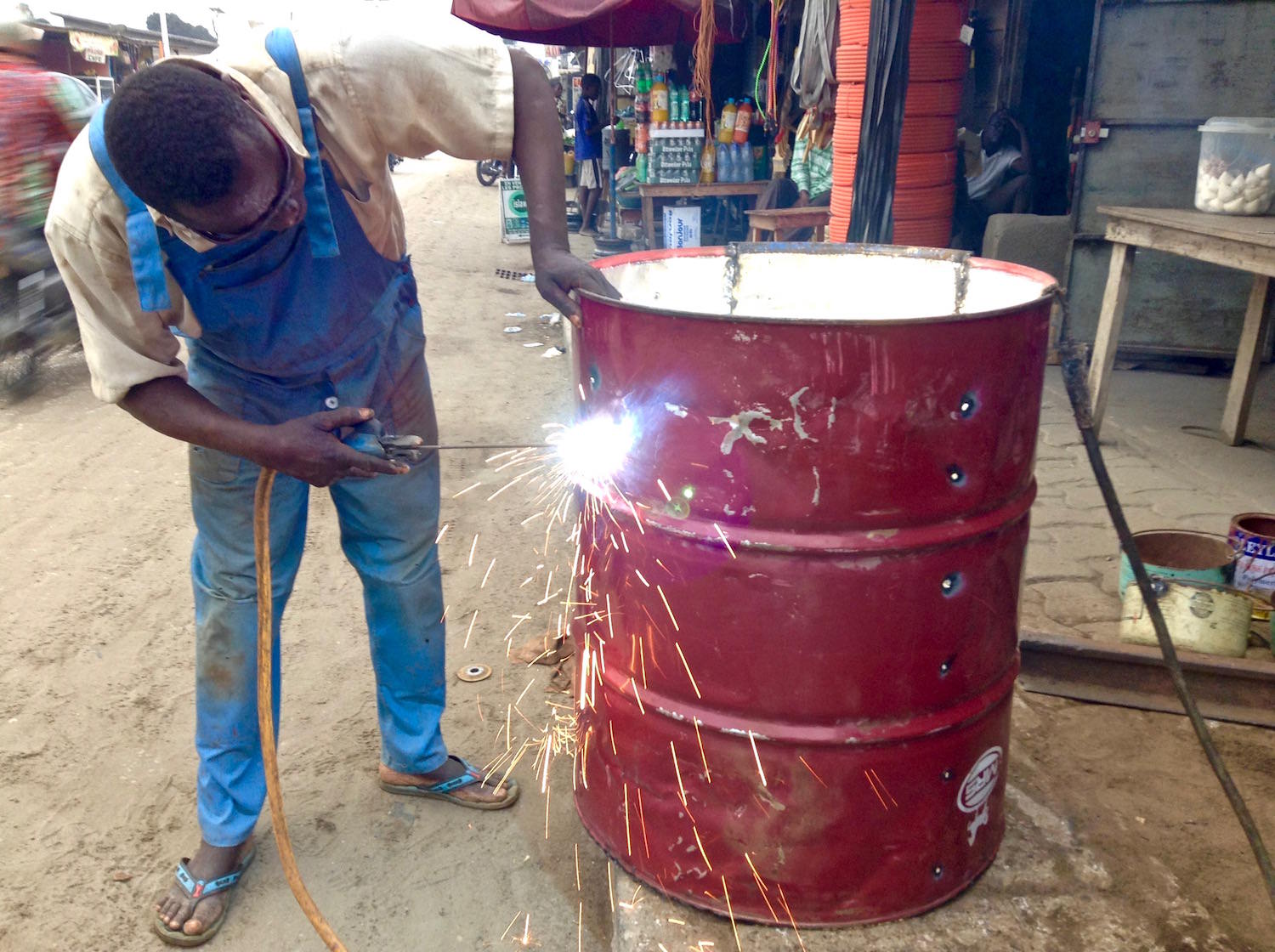 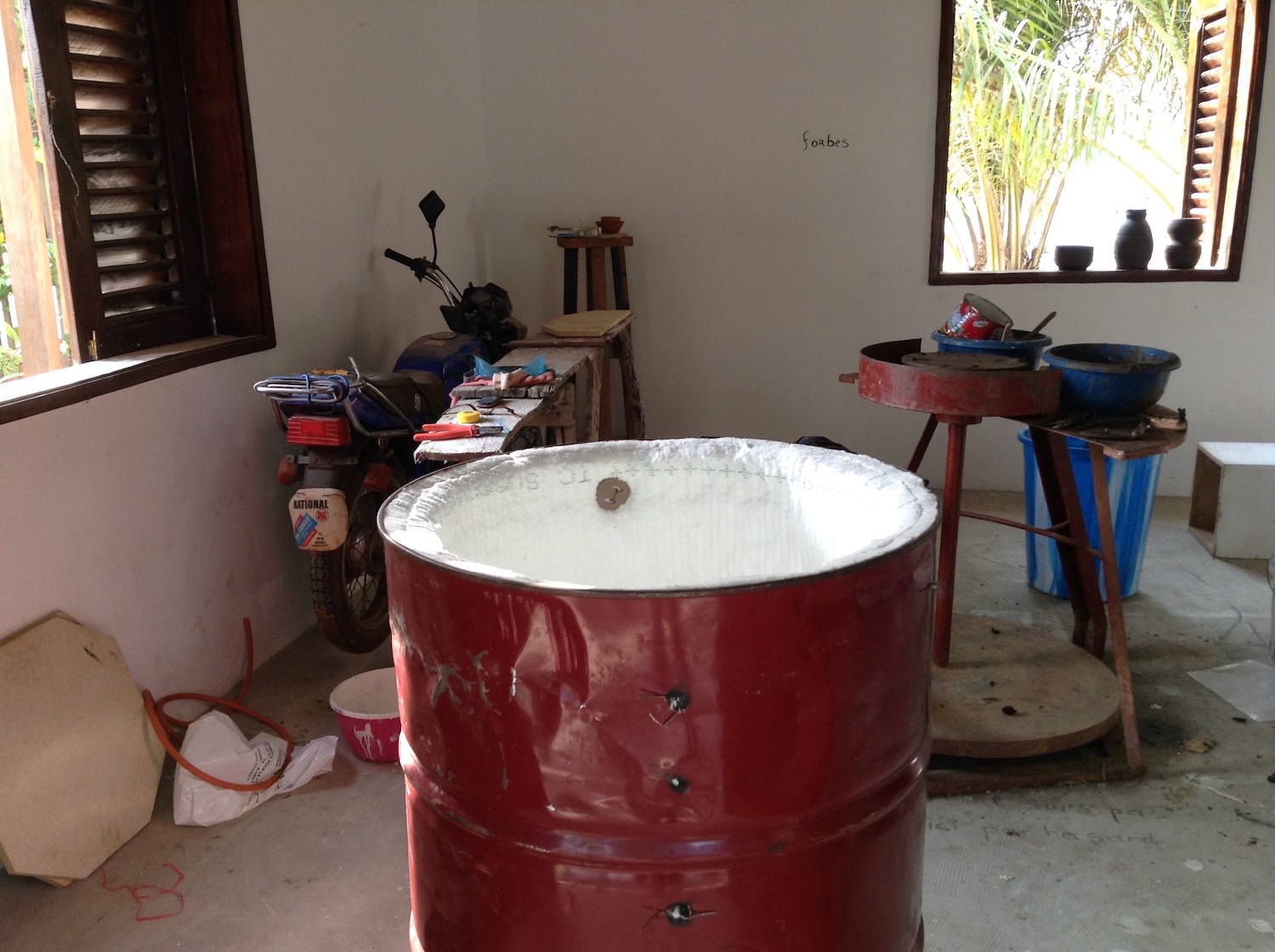 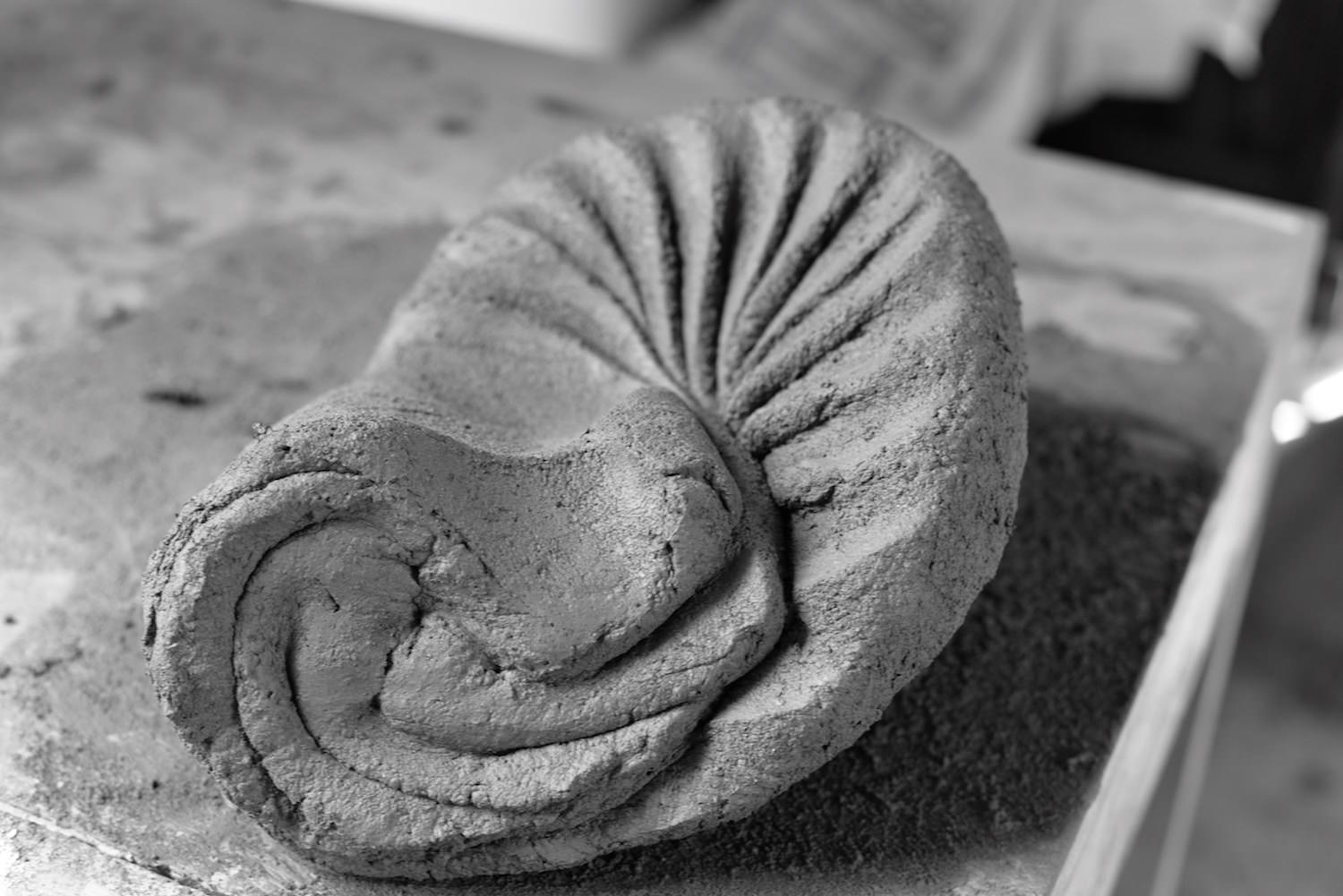 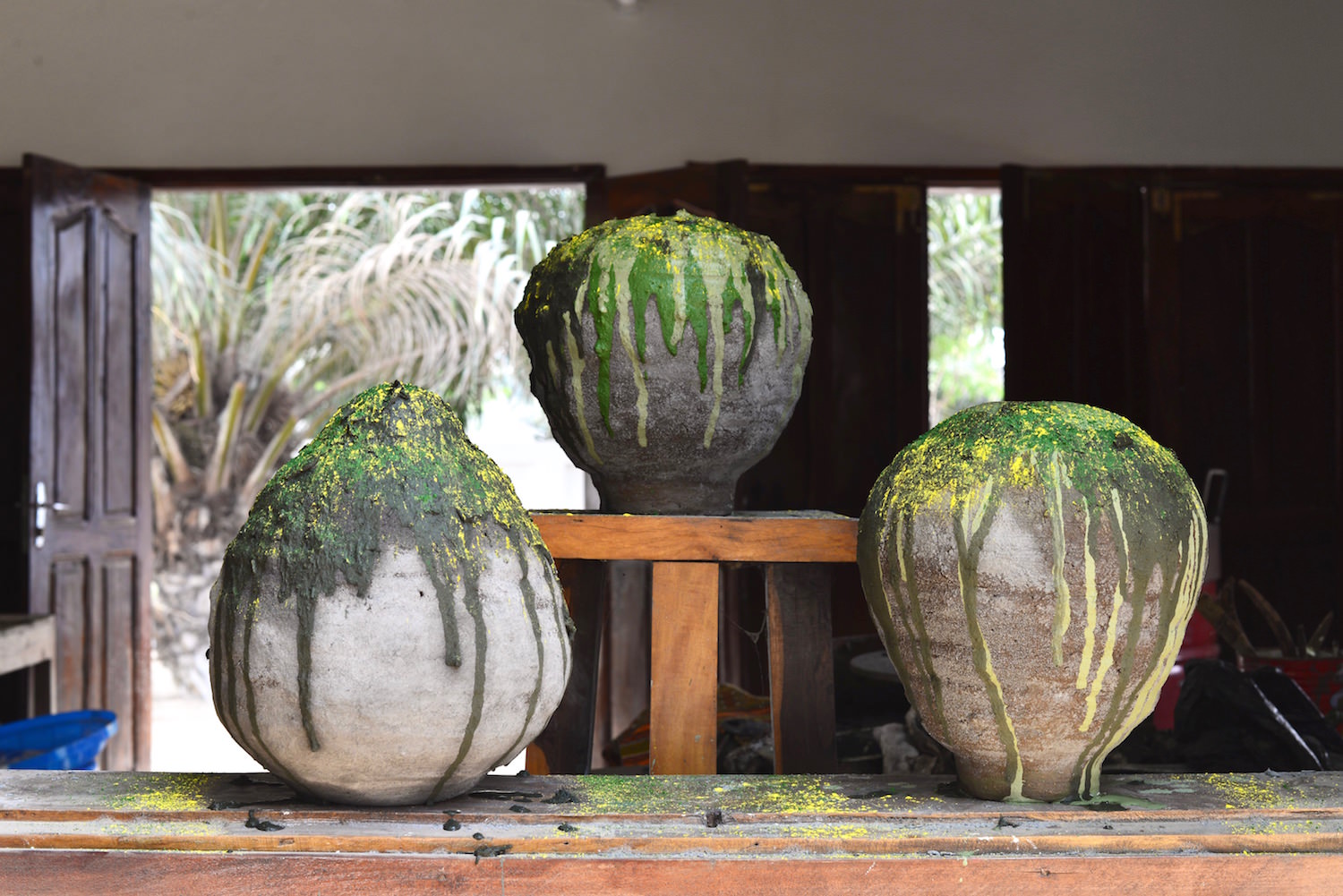 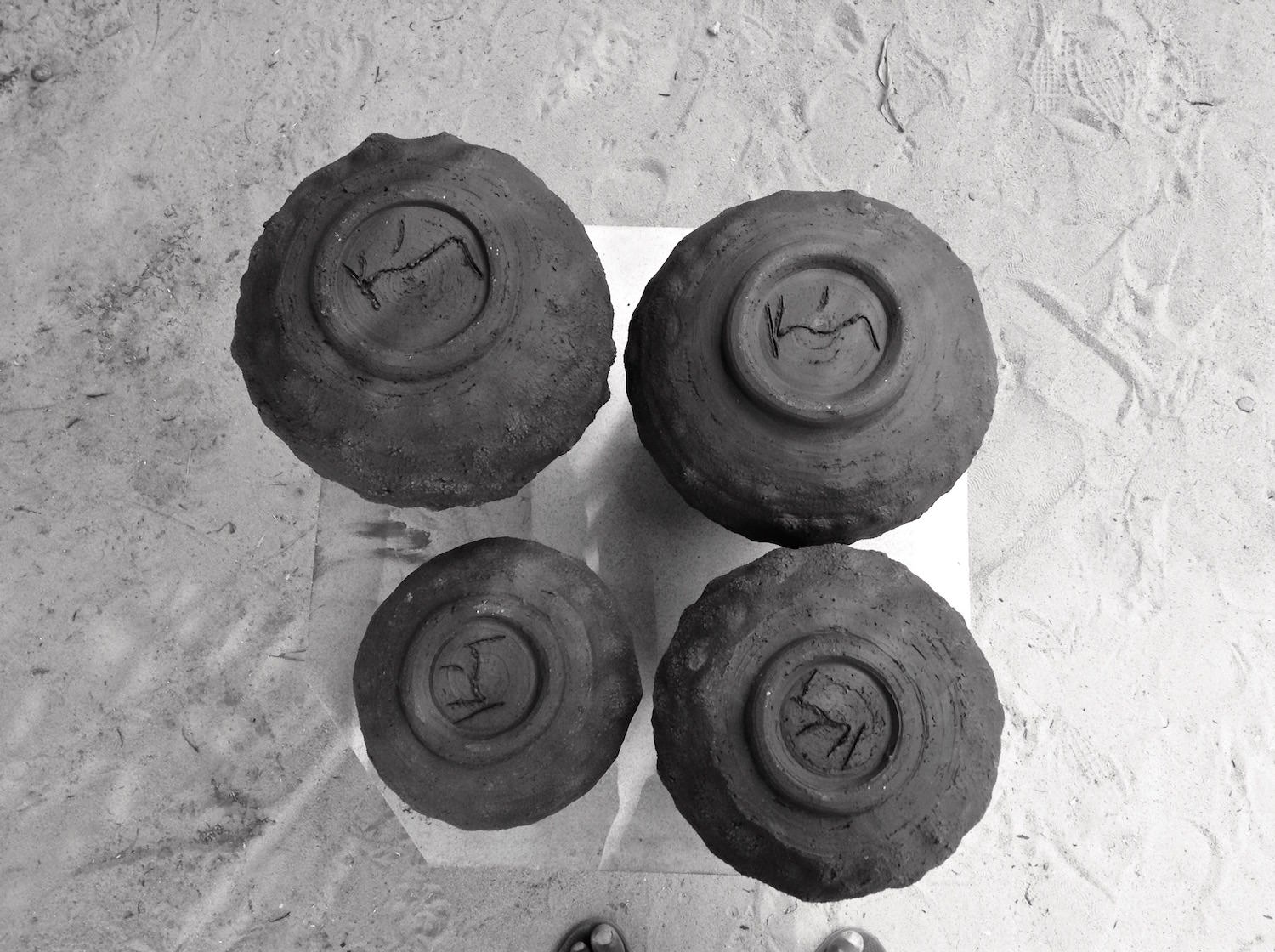 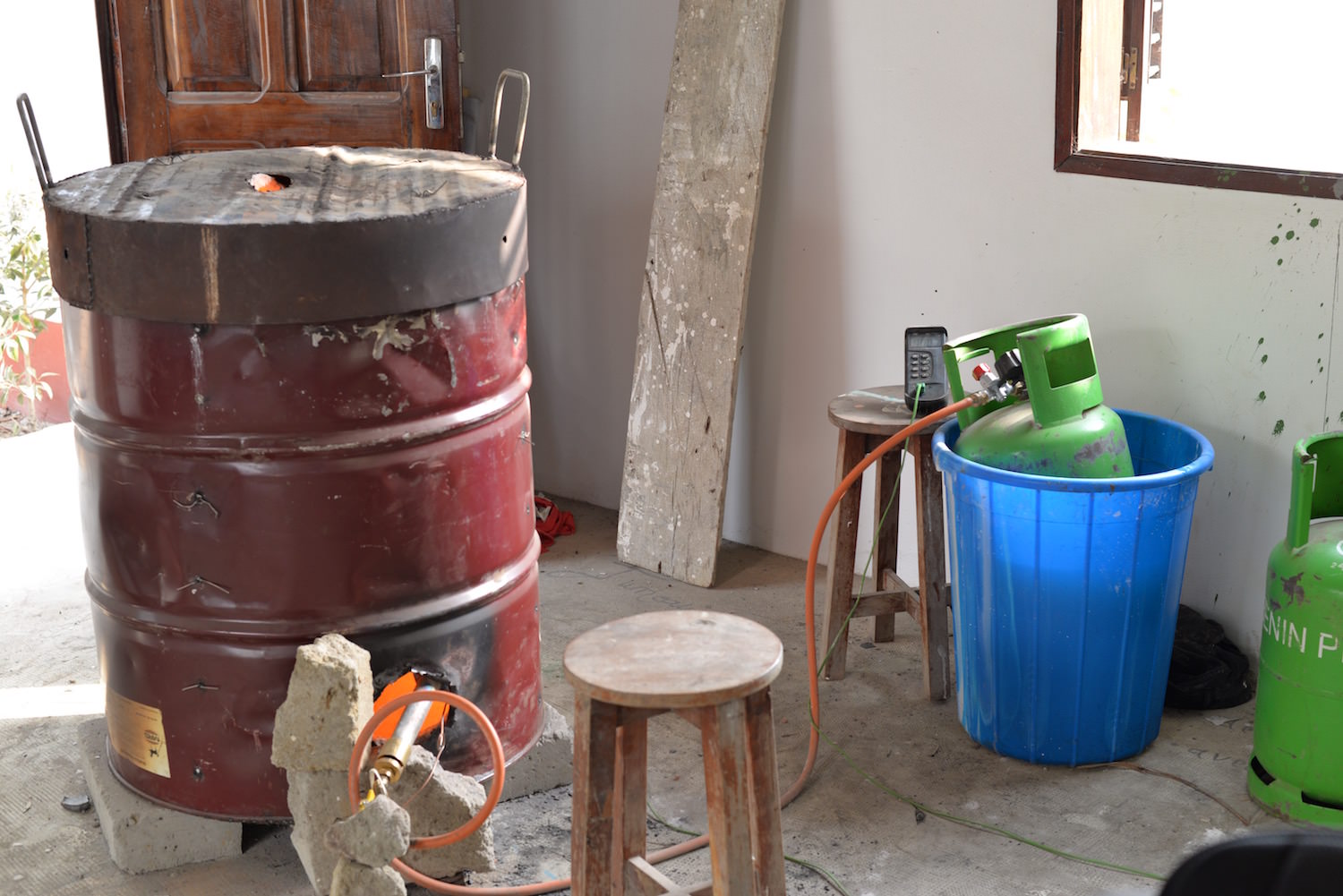 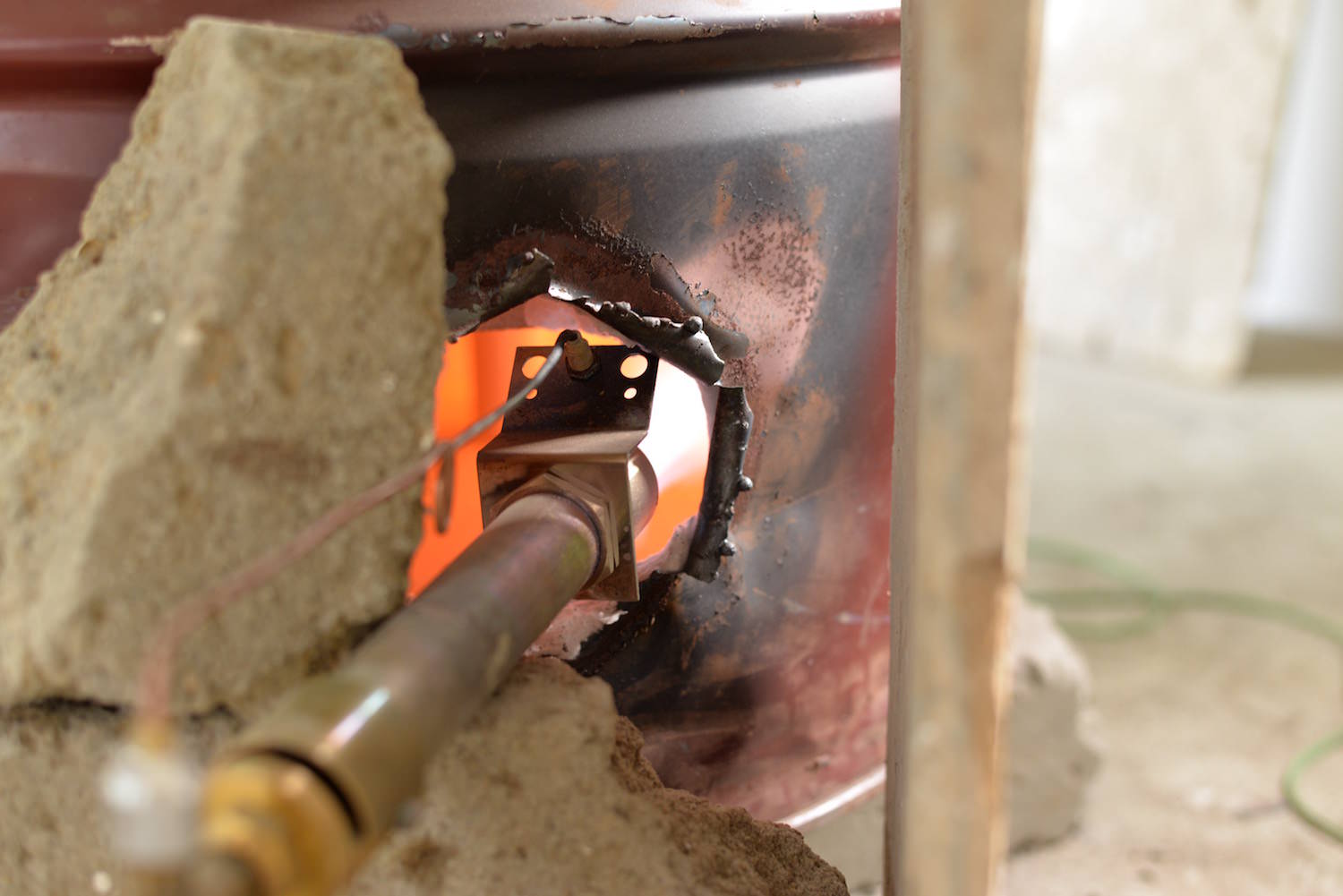 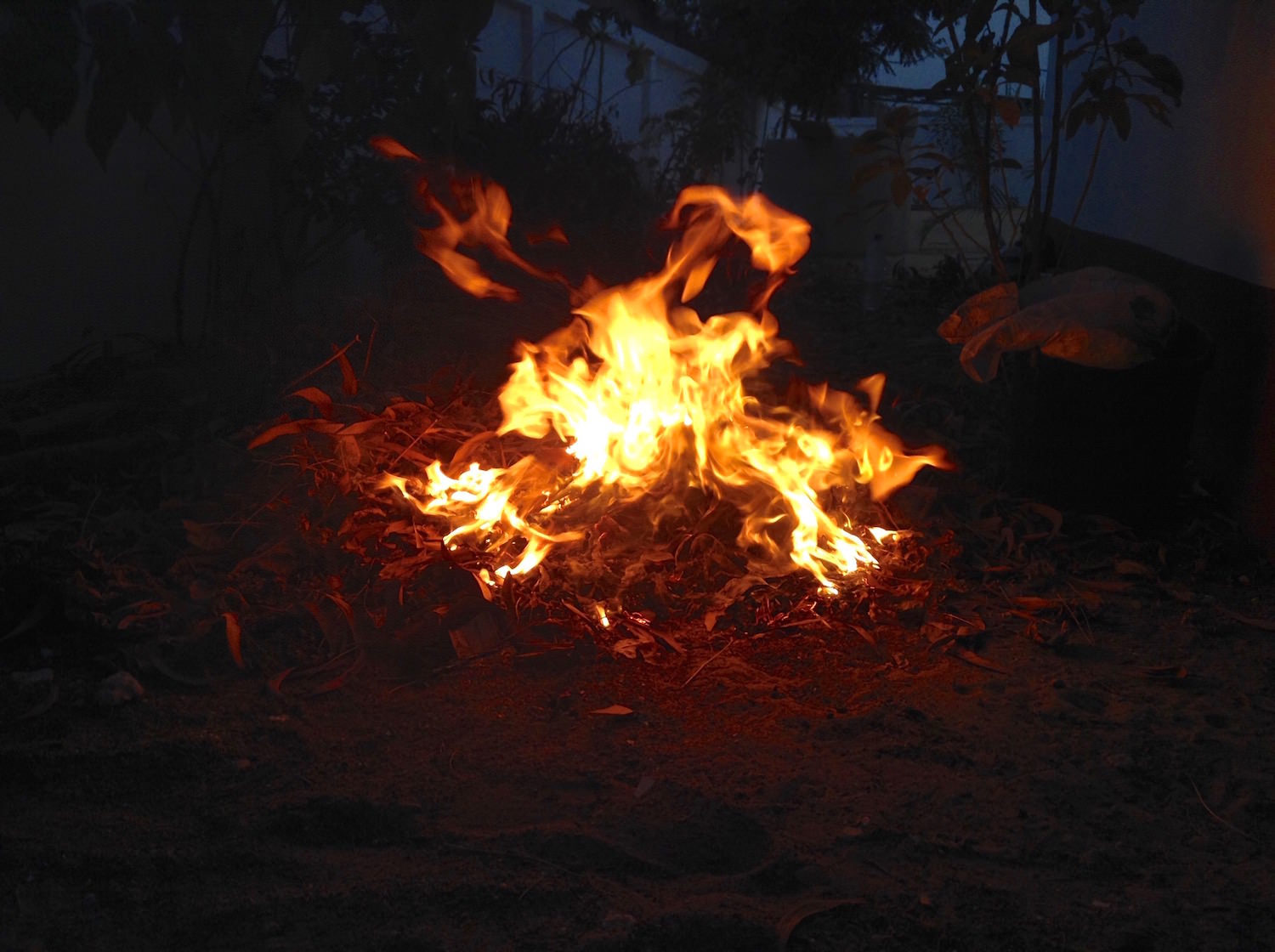 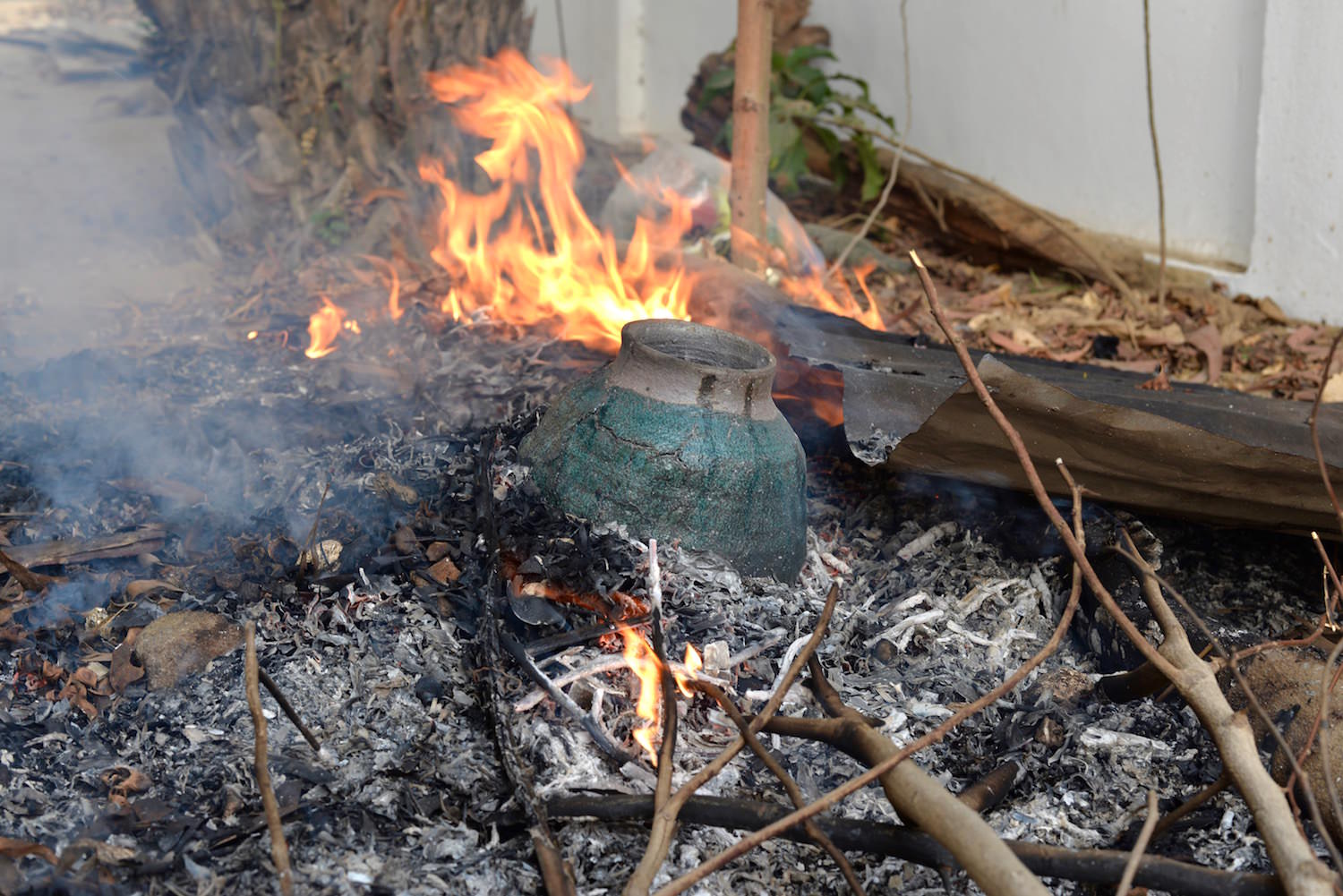 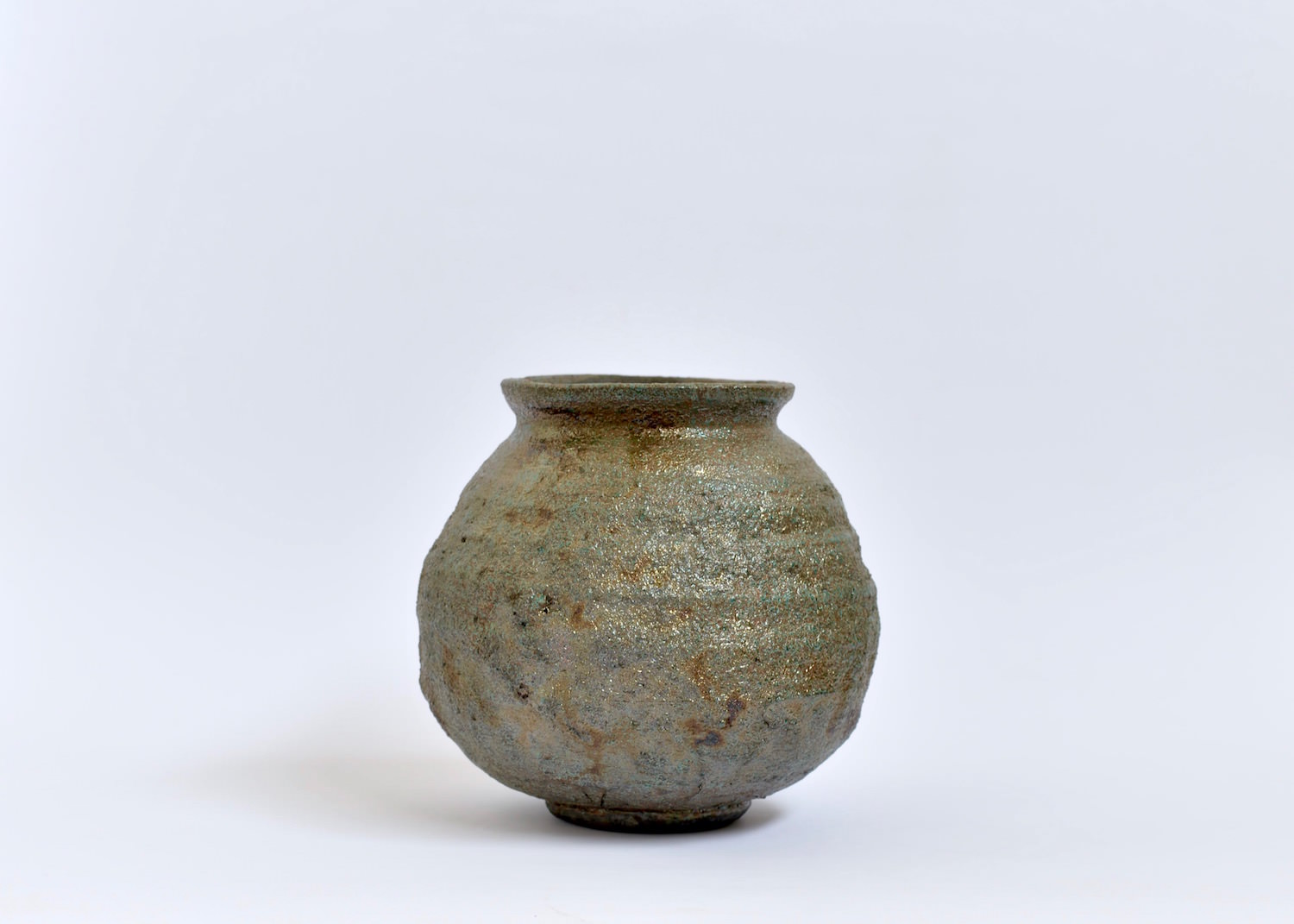 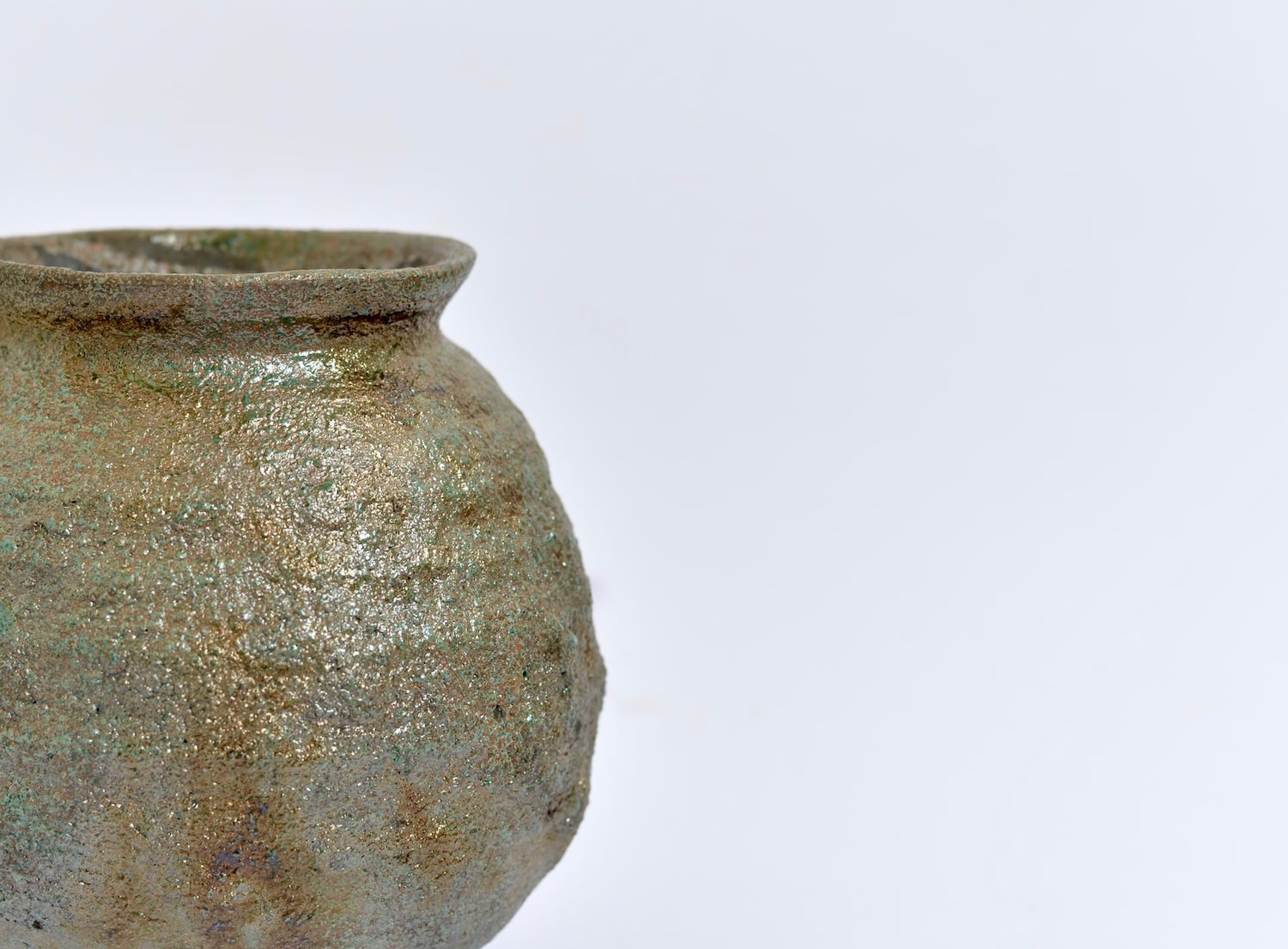